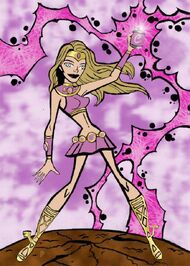 Cosmo Girl is an Atomic County character. She was developed by Seth Cohen.

In the Atomic County universe, CosmoLass (Cosmo Girl initially), is based on the characters of Marissa Cooper, in this world she's still alive. Cosmo girl dates Kid Chino (Ryan Atwood). She possesses a magic bottle (that gives her superpowers) and she has a car named Cosmobile. In the animated series she has a lot of relationships : Battle Axe, Johnny Tears, All American Boy and The Mentalist. Her archenemy is Mistress Widow, in the 7 episode she discovers that her mother is Mistress Widow and that one of her allies and ex-boyfriend (All American Boy) has an affair with her.

Community content is available under CC-BY-SA unless otherwise noted.
Advertisement